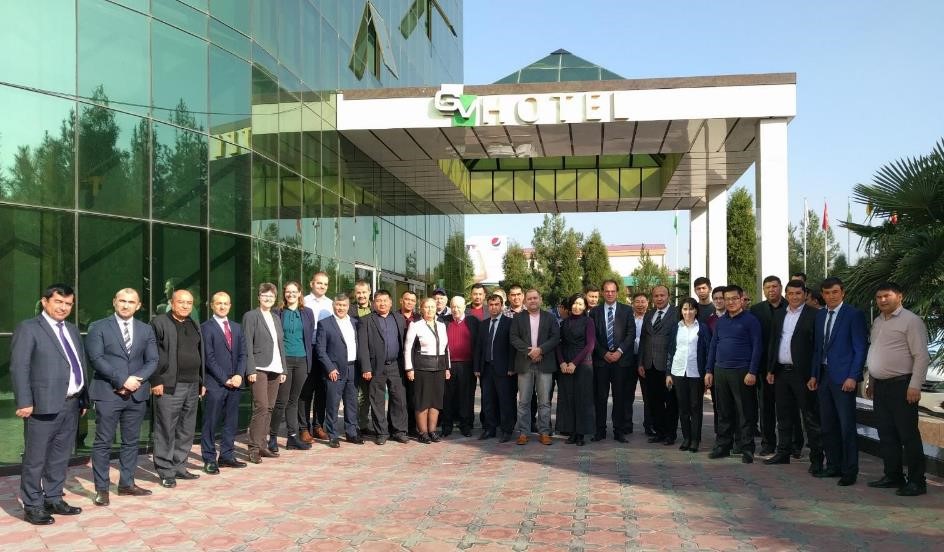 From 7th to 8th of November 2019, the second WUEMoCA (“Water Use Efficiency Monitor in Central Asia”) User Forum meeting, following the first one in 2015, took place in Tashkent (Uzbekistan). The meeting brought together 30 representatives from the irrigation water management of all five Central Asian countries, and from international organizations. WUEMoCA developers from the German Universities Wuerzburg and Halle-Wittenberg and from SIC ICWC Tashkent (“Scientific Information Centre of the Interstate Coordination Water Commission”) presented the WUEMoCA web-tool and its background, and discussed specific use cases for the irrigation management, i.e. strategies and applications.

WUEMoCA is an operational scientific web-mapping tool for the regional monitoring of land and water use efficiency in the irrigated croplands of the transboundary Aral Sea Basin (Kazakhstan, Kyrgyzstan, Tajikistan, Turkmenistan, Uzbekistan, and Afghanistan). The tool is being developed by the Universities of Wuerzburg and Halle-Wittenberg in cooperation with Greenspin GmbH from Wuerzburg and SIC ICWC, in the frame of the CAWa project (“Central Asian Water”) phases III and IV (2015-2019), funded by the German Federal Foreign Office. It provides access to essential indicator maps such as land use intensity, crop productivity and water use efficiency, based on open-source optical remote sensing products (MODIS, calibrated with in-situ data), climate data, and statistical hydrographic data such as water intake. Observations are provided for the period from the year 2000 onwards.

An automated processing of newly incoming satellite and climate data allows for the operational use of this geoinformation tool in land and water management institutions across Central Asia. The interactive “User Polygon Toolbox” was developed to update information and to fill the still existing data gaps, such as boundaries of small units like water user associations or sensitive water statistics. Users are enabled to define own areas of interest, to modify existing information, and to add own statistical data to calculate further indicators, e.g. irrigation efficiency within the ongoing season. Changes remain on the client side and do not update the central database of WUEMoCA.

The first day was all about theory, i.e. the analysis methods behind the tool. The participants learned about the contributions of remote sensing, climate data, and agricultural and water statistics to the tool’s database. The scientific methods of assessing land use and water use efficiency are being introduced. Moreover, the linkage of satellite and ground information was explained by integrating field samples into the validation strategy. It became clear that the main aim of WUEMoCA is to show a regional overview of spatial and temporal trends, the “big picture”, and not the field level, due to the moderate resolution of the used satellite images. It was concluded that WUEMoCA has a great potential and flexibility for future improvements being an open source tool, i.e. freely accessible data, code, and options to calculate indicators online.

Following the presentations by the developers, the participants discussed in detail about the applicability of WUEMoCA in governmental water management plans, to face the future challenges of increasing water scarcity, growing population and accelerated demands of more irrigation water. Water managers confirmed that WUEMoCA can be regarded very useful for site specific informed decision making in applications of land and water management in the Aral Sea Basin. It also has potential for addressing transboundary issues and conflicts due to its open access data policy.

The second day was allocated for the water managers to get familiar with the tool itself. The participants were guided through the tool by means of exemplary use case scenarios. Everybody could explore the irrigated areas within the Aral Sea Basin on the screen regarding land use intensity, water productivity and irrigation efficiency. The users learned how to compare maps and diagrams of different years and aggregation levels (like basin irrigation system authorities – BISA, districts, and for pilot areas water user associations – WUA, and channel command areas). They got to know the export function to Excel tables and discovered the powerful “User Polygon Toolbox”, e.g. by importing a prepared table with 10-day water intake values and calculating the irrigation efficiency for a certain district in a high temporal resolution.

In the course of the competent explanations by the SIC ICWC experts, it was emerged that the remote-sensing-based water information provided by WUEMoCA (e.g. the water productivity based on evapotranspiration) is of particular interest for the water managers in the region, since they often have very imprecise information of the amount of water, which is actually taken from the irrigation system.

However, the major limitation to the full application of any online tool including WUEMoCA is the limited internet access in many parts of the target area, i.e. Central Asia and Afghanistan. Nevertheless, the participants of the 2-day User Forum agreed that modern Earth observation and information technologies have a high potential for improving water management in the Aral Sea Basin as they provide a reliable data basis, particularly in transboundary river basins.

← prev: Workshop Report at the Department of Remote Sensing – November 27, 2019
In situ soil moisture campaign in a Mediterranean environment →