MSc handed in “Deforestation in Myanmar – what can we say about causes?”

MSc handed in “Deforestation in Myanmar – what can we say about causes?” 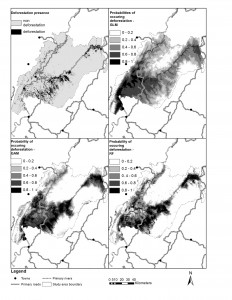 Andreas Hess, Global Change Ecology MSc student, just handed in her MSc “Deforestation in Myanmar – what can we say about causes?”. The MSc was conducted jointly with the Smithsonian Conservation Biology Institute (Peter Leimgruber) and Ned Horning and fieldwork was conducted in Myanmar with a local NGO.

Deforestation in the tropics is a global issue. Tropical forests are important not only for local livelihoods, but also for global climate regulation and biodiversity. Causes of forest loss have been extensively assessed on larger scales, but information on national and sub-national level is often limited. In Myanmar, spatially explicit information on drivers of deforestation is almost non-existent.

In this study I analyzed deforestation and factors affecting it in Myanmar, with focus on deforestation hotspots. I calculated change statistics from a Myanmar wide satellite imagery based forest cover change classification for deforestation on country level, the three states/regions Kachin, Sagaing and Tanintharyi and Homalin township. Using GAM, GLM and Random Forest models, I assessed the importance of eight factors in driving deforestation in Homalin township, namely elevation, slope, and distance to roads, waterways, populated places, protected areas, and reserved forests. To delineate areas under future deforestation risk, I also performed spatially explicit deforestation predictions.

The results show a regionally distinct influence of mining in Kachin and Sagaing and plantation expansion in Tanintharyi on deforestation. In Homalin township, deforestation was strongly influenced by elevation, slope, distance to streams and populated places. The risk for deforestation was predicted highest in low areas in proximity to waterways and towns and villages.