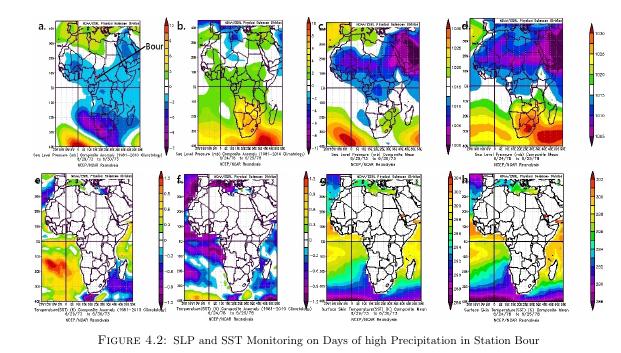 Moses Duguru, MSc student at the Global Change Ecology study program just handed in his thesis. He worked on climate patterns in West-Central Africa. Global climate has been warming rapidly since the beginning of the 20th century due to the emission of green house gases, inevitably altering the character of local and regional climate systems in the world, particularly the western parts of Africa. The main objective of this study is to analyse trends in 5 precipitation indices, based on daily data from 31 meteorological data stations. The 31 stations from which data was analysed in this study were from Togo, Benin, Ivory Coast, Gabon, Central African Republic and Congo for the time range of 1950-1980. RClimdex software was used to process the magnitude of precipitation while the trend was determined using Mann-Kendalls test at (90%) p < 0.1 significance level. 93% of stations studied showed negative(decreasing) rainfall trends for precipitation total (PRCPTOT), 95th percentile(R95P) and 99th percentile (R99P) rainfall showed 67% and 61.29% of stations with negative trends of precipitation respectively, consecutive dry days(CDD) was positive (increasing) in 61.29% of stations while consecutive wet days (CWD) was negative (decreasing) in 67.74% of the 31 stations. This study shows that the magnitudes of the precipitation was predominantly negative(decreasing) rainfall trends from 1950-1980 in most of the stations, thereby indicating an evidence of coupling effects of a warmer climate and regional precipitation. These precipitation negative trends and magnitude has various effects on society and ecosystems within the scope of climate change in Western Africa.