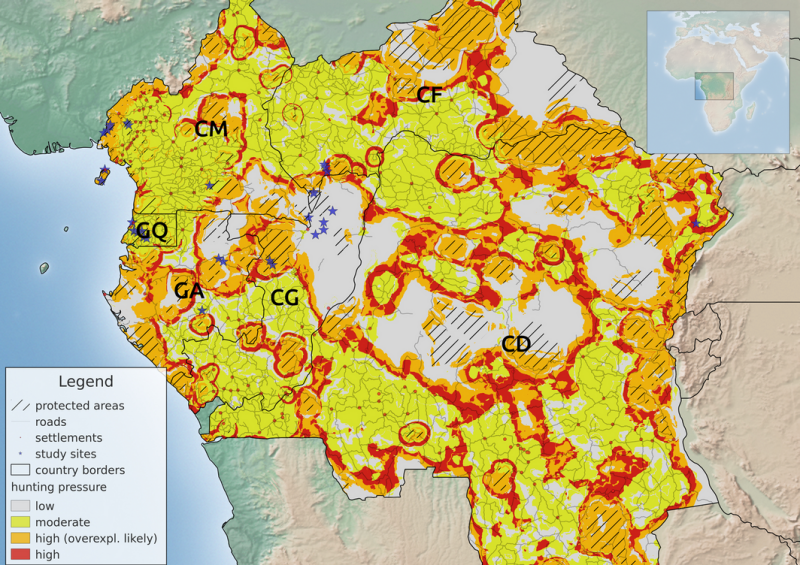 Our analysis on mapping bushmeat hunting pressure in Africa based on various co-variates, such as land cover, is now available online. Is is related to our article in NATURE Scientific Reports.

Hunting and trade of wild animals for their meat (bushmeat), especially mammals, is commonplace in tropical forests worldwide. In West and Central Africa, bushmeat extraction has increased substantially during recent decades. Currently, such levels of hunting pose a major threat to native wildlife. In this paper, we compiled published data on hunting offtake of mammals, from a number of studies conducted between 1990 and 2007 in Cameroon, Central African Republic, Democratic Republic of Congo, Equatorial Guinea, Gabon, and Republic of Congo. From these data sources, we estimated annual extraction rates of all hunted species and analyzed the relationship between environmental and anthropogenic variables surrounding each hunting rate and levels of bushmeat extraction. We defined hunting pressure as a function of bushmeat offtake and number of hunted species and confirm that hunting pressure is significantly correlated with road density, distance to protected areas and population density. These correlations are then used to map hunting pressure across the Congo Basin. We show that predicted risk areas show a patchy distribution throughout the study region and that many protected areas are located in high-risk areas. We suggest that such a map can be used to identify areas of greatest impact of hunting to guide large-scale conservation planning initiatives for central Africa.