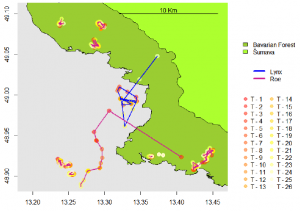 oe Premier submitted his M.Sc. thesis on “The Lynx Effect: Behaviour of Roe Deer in the Presence of Lynx in a European Forest Ecosystem” within the Global Change Ecology M.Sc. program. He was co-supervised by Marco Heurich from the Bavarian Forest Nationalpark. Predation risk is one of the main drivers of prey behaviour. In this study the behavioural responses of roe deer under the predation risk of lynx were investigated using a combination of spatial analysis and statistical analyses. Evidence for the hypothesis that roe deer exhibit avoidance behaviour to lynx locations both spatially and temporally could not be found, however the upper limit of avoidance behaviour was constrained to within 4 hours. It was hypothesised that the activity level of roe deer was driven by proximity to lynx, with activity levels increasing with decreasing separation distance. The activity level of roe deer was in general found not to be strongly driven by the variable distance to lynx. As hypothesised, the activity level of roe was associated with habitat, such that lower activity levels occurred in areas of highest visibility (low cover) and higher activity in lowest visibility (high cover). It was found in general that a LiDAR habitat index was the most important explanatory variable of roe deer activity level. In the specific case of the closest encounters (within 24 hours and 1Km) during the night, lynx’s most active time, activity level of roe deer was found to be elevated compared to less proximate individuals. There is also a suggestion that these roe deer move further than those more distant to lynx. The hypothesis that roe deer select habitats of lower predation risk when close to lynx was partially supported; it was found that roe deer selected lower predation risk areas when closest to lynx (within 24 hours and 1Km) during winter nights and consistently inhabited lower predation risk habitats during summer when compared to winter. Furthermore, it was shown that activity level was lower in high risk habitats as hypothesised. Under the predation risk of an ambush hunter, in this case lynx, it is suggested that roe deer adopt a “business as usual” behaviour, with energy diverted for anti-predator behaviour limited to scenarios of heightened risk. It is believed a near continuous GPS tracking schedule would be required to resolve lethal and non-lethal encounter events and illuminate avoidance behaviour and perception distance further. 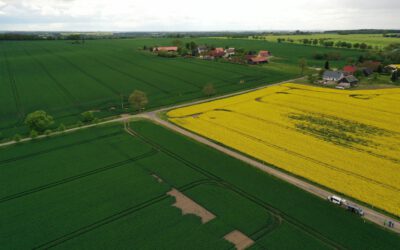